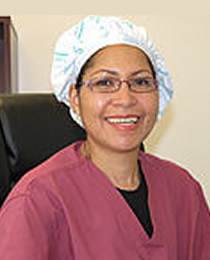 Emma Wright is a Registered Nurse specialized as a First Assistant in complex minimally invasive gynecologic surgery.  Born in the Philippines, she obtained her nursing degree from Trinity Educational Institute of Nursing in Manila, Philippines and completed her Bachelor of Nursing degree from University of East Ramon, Magsaysay Memorial Medical Center in 1983.

Besides being a Registered Nurse, Ms. Wright has general medical management and administration experience having also worked as the Administrator of Forbes Ambulatory Surgery Center and as Office Manager of Francis D. Dickson, MDPC, an esteemed Gynecologic Private Practice in Southern Maryland, a suburban Washington, D.C area in the United States.  While at Francis D. Dickson, MDPC, she also participated in several medical missions to the Philippines and Ghana.

She teamed up with Dr. Francis Dickson to establish Nova Surgery Center as a medical facility of excellence in Minimally Invasive Surgery.