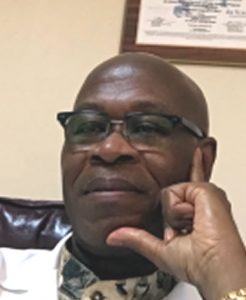 For over 25 years, Dr. Dickson ran an active, private clinical and medical practice in suburban Washington DC. He served as the Chairman of the Obstetrics and Gynecology department of Medstar Southern Maryland Hospital Center and was frequently featured as a physician of excellence.

Dr Dickson’s expertise covers advanced surgical management of uterine fibroids and Endometriosis, using minimally invasive approach on laparoscopic or robotic platform. Dr Dickson retired from active practice in the United States in June 2017, to devote his attention to helping improve healthcare delivery in Ghana. He is an avid reader and spends his time off on exotic vacations with his wife, Dr Violet Habwe and their two lovely daughters, Ruth and Melanie.

Fellow of the American College of Obstetrics and Gynecology.

American Board of Bariatric Physicians

Association of Ghana Physicians and Surgeons